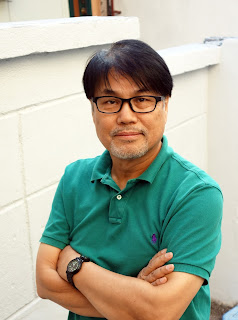 Lee Tae-ho is a multi-media artist and art critic and a renown public art practitioner. He has acted as the artistic director for International projects, including Busan Biennale, Seoul-Asia Art Now, the Kyung Hee Gallery, the Naksan Public Art Project in Seoul. He also teaches Fine Arts at Kyunghee University. 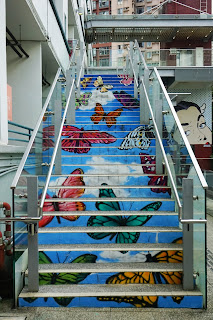 
Title: Butterflies
Professor Lee Tae-Ho is a renowned public art practitioner from South Korea. In this past June, he was invited by the Korean Cultural Center in Hong Kong and PMQ ito give this flight of stairs a brand-new look with vividly coloured butterflies. 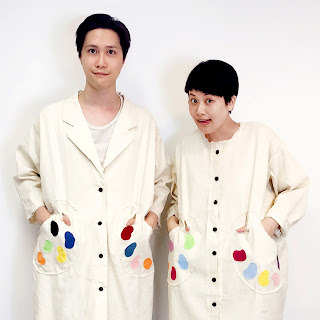 Bibi and Calvin are the designers of STARS & TART, a colourful fashion and accessories brand that focuses in creating wearable art of their unique illustrations. Bibi and Calvin have showcased their brand and illustrations to many exhibitions - Paris Premiere Classe, Tokyo Designers week, Shanghai Ontime show and etc. They have created a joyful culture of cuteness and have accumulated many fans from all over the world. 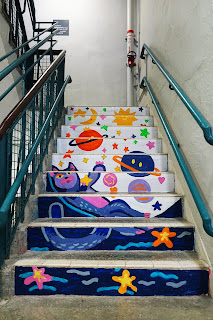 Title: The Curious Galactic Meow
Once upon a time, there was a galactic cat. He was very curious and loved to collect special stars. The cat walked past PMQ and said, “This is an interesting place.” He decided to stay for a while so he could play around and have fun. Meow~ 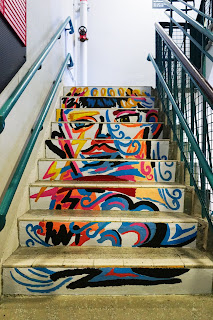 Title: The Portrait of Wind & Thunder
This painting is a portrait of two natural phenomena, wind and thunder. The former is gentle and the latter is fierce but they both possess great power. It represents what Star & Tarts thinks of Hong Kong, a multicultural city with different thoughts and faces. 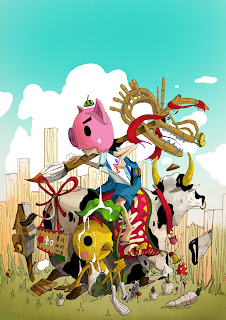 “We love Art and also love to see your smile.”
The Hong Kong local art collective, Smile Maker, believes Art can make our spirit and life better. Their goals are to spread positive messages and to bring a smile to the society through their art work on walls and stairs. 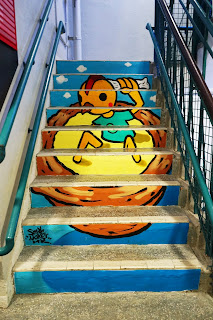 Title: A Delicious Bath
Egg tart is not only Hong Kong's local delicacy , but also Smilemaker Little Chick's favourite afternoon snack. This time, Little Chick has prepared an extra-large egg tart for PMQ, which can be used as a bathtub as well! Come and see Little Chick bathe and eat at the same time! 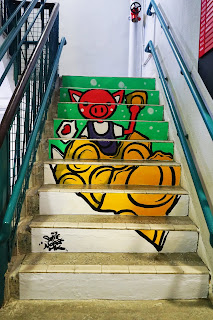 Title: Love for food in distance
Smilemaker believes in the art of distance. The most unforgettable food experience is to try something that you rarely get to eat. So, Smilemaker Little Piggy would like to recommend egg waffles to all the tourists. Each egg waffle stall has its own secret recipe, remember to try  them all in Hong Kong!
Posted by PMQ 元創方 at 2:08 AM No comments: 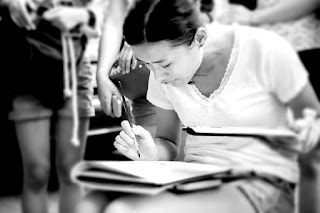 Sisi’s illustration style is influenced by both Japanese manga art and traditional Chinese water painting, producing sharp graphic imagery, combined with a natural warmth in all her pieces. Her versatility with traditional and digital techniques gave her opportunities to work on a variety of commercial illustrations. Her love and passion for design has led her to England where she continued to develop her illustration and artistic style at Central Saint Martins. With her studies now completed, Sisi’s experience in London has broadened her horizon, developed a greater appreciation for mother nature and a new found love in landscape painting.


Sisi is a freelance graphic design artist and illustrator with a passion for ink and watercolour techniques. After studying graphic design at Macau Polytechnic Institute, Sisi worked as a brand designer. Since 2012, she began focusing on advertising, product packaging, fashions and children’s illustrations. 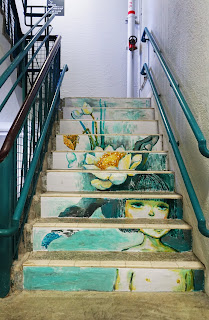 Title: Lotus
Kimochi is thinking how  can one be neither sad nor happy in the face of birth, aging and sickness. Kimochi is a fairy with the ability to change the plant on its head based on its feelings. This time,  the three lotuses grown represents, newborn, blooming and dying. 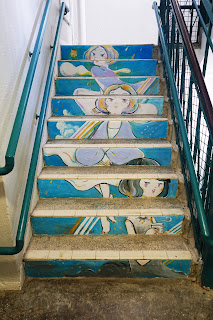 
Every rain cloud is one of a kind, giving us three different little girls. 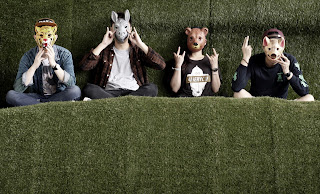 Parents Parents is a Hong Kong creative arts group established in 2012. The collective consist of people with experience in graffiti, drawing and illustration. Their work ranges from large scale outdoor graffiti, live painting, restaurant wall paintings, installation art, collaborative products to graphic designs and etc. The core members of the collective - Chris, Jimson, Ysoo and Wong Tin Yau first met at the same school. Parents Parents’s work tries to find unusual images by exploring within the chaos of the city. Parents Parents hopes to spread their works and ideas on the streets or perhaps to people’s homes. 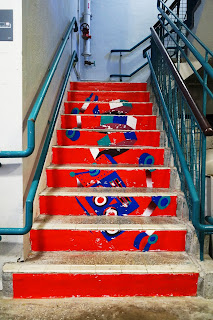 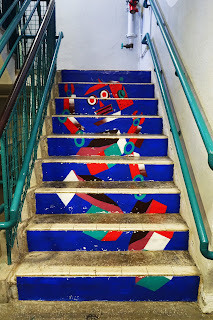 The artist group is called "Parents Parents" because they love items from the 50's, which was also the adolescence of their parents' parents. They used the tin robot as the key element, with exaggerated movements and strong colour contrast to remind the pedestrians to watch their steps. 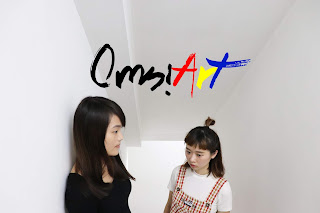 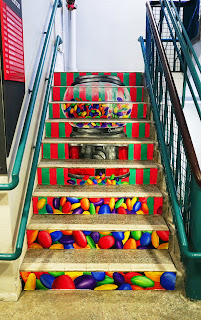 Title: Candy Vending Machine
Material goods play a greater role in our lives as we age. However, the satisfaction gained from wealth is nothing, compared to the great childhood joy of getting colourful candies from the candy vending machine. 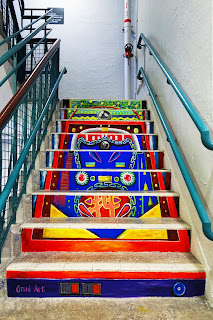 Title: Pinball Machine
Living in Hong Kong is like living in a pinball machine. We get opportunities but we also face challenges. We move fast but we also stumble. Every pinball has its own path, so does every person in Hong Kong. We should always remember to take control of our own games and to hold our heads up high. 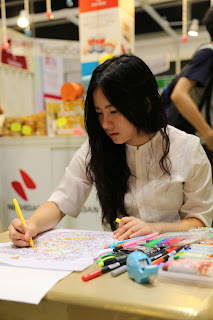 Jane Lee (Messy Desk) is an up-and-coming illustrator and comic artist based in Hong Kong. Her comic drawing style is similar to European’s “Bande Dessiné”. Messy Desk has a special bond with France. She was invited by Na Edition to attend the Angoulême International Comics Festival, the world’s second biggest comics festival, where she received an award as an up-and-coming comic artist. She was also recognized by the French Art Magazine, Get Freaky, and held exhibitions in France. Jane has exhibited in Europe and America. 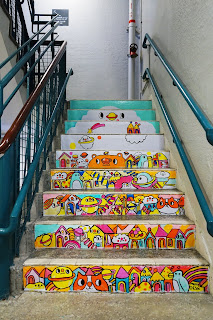 Title: A Daydreaming City
The artwork was inspired by the crowdedness of Hong Kong. Planets and clouds represent imagination and the fond memories of our childhoods. The city is filled with different kinds of animals and characters but they all live happily together in harmony. The blue sky and clouds are set as the tone of the background. 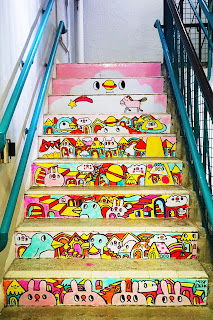 The houses are  made with all kinds of desserts, such as marshmallows, lollipops and ice-cream, sharing their sweetness with the city. Pink is the dreamy tone of this city’s sky.